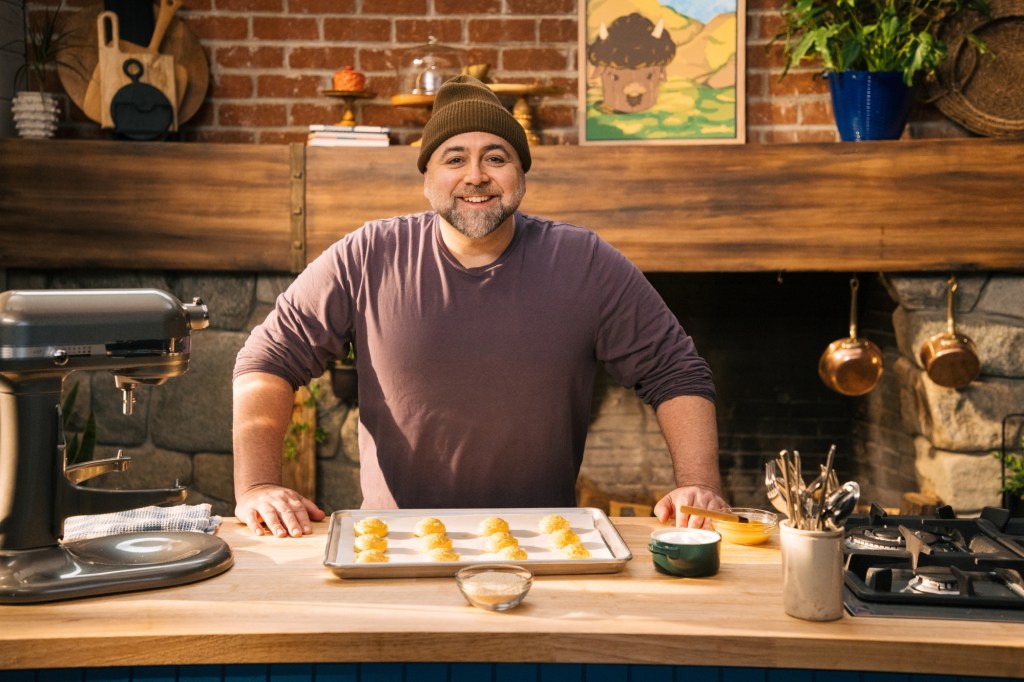 He is “the ace of cakes” and Buddy Valastro’s worst nightmare in “Buddy vs. Duff”.

But Food Network’s new daytime series, “Duff: Ace of Taste,” which premiered Sunday, April 24, reveals another side to celebrity chef Duff Goldman who is best known for his cooking. Now he’s expanding his horizons to share savory recipes as well, drawing on all of his culinary skills as a classically trained chef and a graduate of the Culinary Institute of America in Napa Valley.

Before becoming a stellar baking entrepreneur who built two businesses, Charm City Cakes bakery in Baltimore and Los Angeles, and DIY candy store Duff’s Cakemix with stores in Southern California, he worked in fine dining rooms such as French Laundry and Olives. For this show, he keeps his feet on the ground with recipes from his real life as a father, husband, and part-time rock musician who plays bass in a band with some of his chef buddies.

The episodes will include photos of his home kitchen in Topanga Canyon and he’ll cook food for his band’s workout, his young daughter Josephine’s first tea party, a school bake sale and more. Get ready for sliders, chili, cornbread, mini quiches and other goodies. We spoke to Goldman about why he’s welcoming viewers into his home to film his new show.

Q. Everyone thinks of Chef Duff as the ace of cakes, but I remember you telling me about the meat cake you made for your wedding. Savory has always been one of your skills, hasn’t it?

A. Yeah. I started out wanting to be a chef and the first gourmet restaurant I went to, the chef said to me, “Listen, I’m not going to hire you to cook. You don’t know how to cook yet. But I’ll teach you how to make cornbread and cookies. And I was like, OK, anything I can do to get my foot in the door, and I loved that.

A. Yeah. She has a bunch of restaurants now. She’s like the godmother of Baltimore cuisine. She is incredible.

Q. And you’ve worked at other spectacular fine dining restaurants, like the French Laundry and Olives. What did you learn there that you could bring to this show?

A. You just learn to do it right. I find that when people are cooking, they tend to try to save a little time here and there. “Oh, that doesn’t seem to be that important to me, I think I’ll skip that.” But I think when you do things right, not only will they go better, but they will generally be faster.

Q. So, will these recipes be suitable for the average home cook?

A. 100 per cent! I’m not the super fancy type. I make very good chili. I make really good burgers. I don’t do pepper steak or beef wellington or stuff like that. You know what I mean? I’m kind of a slob.

Q. So the recipes are all accessible?

A. I want people to see that real good cooking isn’t as hard as they think. I do real cooking and I think when I break it down and demystify it, it really isn’t that hard to do. … I want people to feel inspired, like, “Wow, I could totally do that.”

Q. Can you tell us about some of the recipes?

A. These are all recipes people can make at home. Texas Chili is really good and I think there are seven ingredients, it’s easy. You don’t need a lot to make really good chili. There is also a lot of pastry. Like I’m going to show you how to make big soft pretzels and it’s something a lot of people are really afraid to do. But I think once they see me do it, they’ll realize there’s only six steps. It’s quite easy.

Q. What about cornbread?

A. I like it very sweet. I love the crust it gets. So when baking cornbread, you preferably have cast iron, but if not, you can use a muffin tin. But what I like to do is I put the muffin pan in the oven and it’s really hot, then I take it out, put the cornbread batter in it, and put it back in the oven. It gets nice and brown and crispy edges and the inside is like a creamy crumble.

Q. That sounds delicious! Do you have any heritage recipes that you will share? You grew up in a Jewish home, didn’t you?

A. I don’t like to honk my horn myself, but I’ve never tasted a better babka than the one I make. It was my great-grandmother’s recipe. She was from Moldova, but for some reason had a lot of Sephardic recipes that were more Spanish and Middle Eastern. I don’t really know how long our family stayed in Moldova; maybe we are from the Middle East. But I love these flavors. And so I make things like baklava with dates and raisins and nuts.

Q. Most of us buy baklava and it loses something because it sits on a shelf. When you make it fresh, it’s amazing.

A. It’s such a beautiful process. I love making baklava, it’s really satisfying.

Q. I think it’s great that you feature personal recipes and I notice that these types of programs are trending. The other day I was watching “Be My Guest” with Ina Garten and it’s personal too, just her cooking at home for friends. “Ace of Taste” is different from your other shows because in “Buddy vs. Duff” you compete, in “Kids Baking Championship” you judge. Is it liberating to do a show where you can cook whatever you like and just be yourself?

A. That’s really nice. I think when people watch the show, they’ll see, “Wow, this guy really loves what he does.” Whether there’s a camera in front of me or not, I’ll always have a good time. I love cooking and being able to share that with everyone.

“Duff: Ace of Taste” airs at noon every Sunday