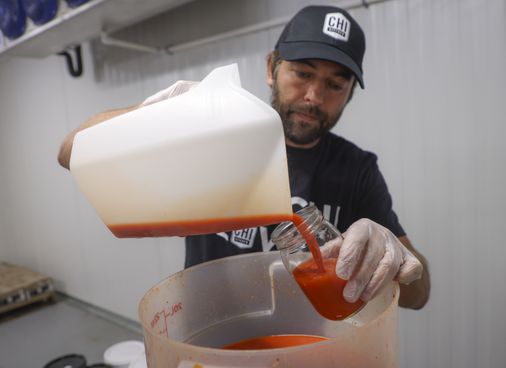 But behind the restaurant and inside these old mills, which may date back to the mid-1800s, are dozens of food entrepreneurs who are rethinking how the food scene is supposed to feed us. They come from a variety of backgrounds: from a chef based in Los Angeles, to the owner of a lean manufacturing company bottling Asian foods, to a retired teacher turned pastry chef. Many of them are collaborating and creating Rhode Island’s food future.

Spent an afternoon talking (and tasting) through the mills before Lorraine Mills Fest on Friday 9th September and Saturday 10th September. Here is what I found.

1. Cakes by Eboni is a company to watch.

Eboni Silva said people have doubted her since she was a high school student in Cranston. She got pregnant at 17 and was told she could never graduate from high school let alone go to college. It lit a fire under her. She graduated from Johnson & Wales University with honors in 2012. Most of the kitchens she applied to were still male-dominated, and she was denied the pastry chef positions she qualified for. After working in baking for various bakeries and restaurants, she split up and founded Cakes by Eboni in 2019. Everything is made from scratch and custom orders range from five-tier wedding cakes with fresh flowers to sweets with faces of celebrities like LL Cool J or The Notorious BIG She has her own space in the mills, which she is designing. During the festival, she’ll be serving cookies (think: massive red velvet oreo cookies or chocolate chip cookies) and breads for breakfast.

2. White Dog Distilling is about to release a more flavorful moonshine.

Husband and wife duo Carlo and Alecia Catucci believe distillation is a marriage of art and science. He has a background in physics and she comes from culinary product development, founding White Dog Distilling in Pawtucket in 2016. They specialize in whisky, which is 85% corn and 15% malted barley; “puppy bourbon,” which is aged in 5-gallon barrels for five months; and limoncello, a light-tasting spirit inspired by Carlo Catucci’s Aunt Gabriella of Rome. But soon, I’m told, the distillery will launch a new line of flavored moonshines (one tastes like Reese’s peanut butter jars, the other is reminiscent of apple pie) with a big pro athlete. They wouldn’t give any names, but stay tuned for a collaboration announcement this fall.

If you haven’t seen Chi Kitchen’s huge pots of kimchi at the market, on restaurant menus, or on social media, you’re missing something. I had a full tasting with owners Minnie Luong and Tim Greenwald, who walked me through their traditional style fermented kimchi. Luong, who previously worked as a chef in Los Angeles, said their products are packed with probiotics and free of preservatives. One thing I learned: Chi sells excess kimchi juice to various bars and restaurants. I took a little shot of it with Luong in their production room, and found it cool, bright, and with the slightest bit of heat stroke in the back on the way down. Luong said some bartenders will use the juice in their Bloody Marys or in shooters paired with ISCO’s Ostreida, which is the first vodka distilled with oysters.

4. Just Like Nana’s rugelach is a traditional recipe that uses healthier ingredients.

Karen Griffin has held all sorts of jobs over the years, from teaching to cleaning houses on Block Island for a few summers. But over the years, her greatest joy has come from baking. Growing up, Griffin learned to cook out of necessity when his grandmother fell ill with Parkinson’s disease and his mother ran his business. Today, her company Just Like Nana’s uses her grandmother’s recipes — with healthier ingredients like cold-pressed coconut oil — to create baked goods. Rugelach is an iconic Jewish pastry that Griffin bakes in four flavors: raspberry nut, apricot nut, cinnamon, and chocolate. She has a few part-time employees, but Griffin also works with intern students from Met Technical High School to bring new business ideas to the company.

Many in Providence are already familiar with Masa Taqueria’s mouth-watering birria, sold in the kitchen of Rock & Rye on Atwells Avenue. But chef Jonathon Kirk, who started the pop-up in his own apartment, is set to hit the road at a new food truck that serves up real al pastor del trompo – thin slices of pork grilled using of a rotating vertical spindle. He is originally from Puebla, a region in central Mexico. Kirk will update the food truck’s Instagram account once the truck leaves the factory after Labor Day weekend.

If you have any suggestions or need a recommendation, email me at [email protected].

Visit Dining in Rhode Island for more. Because everyone must eat!