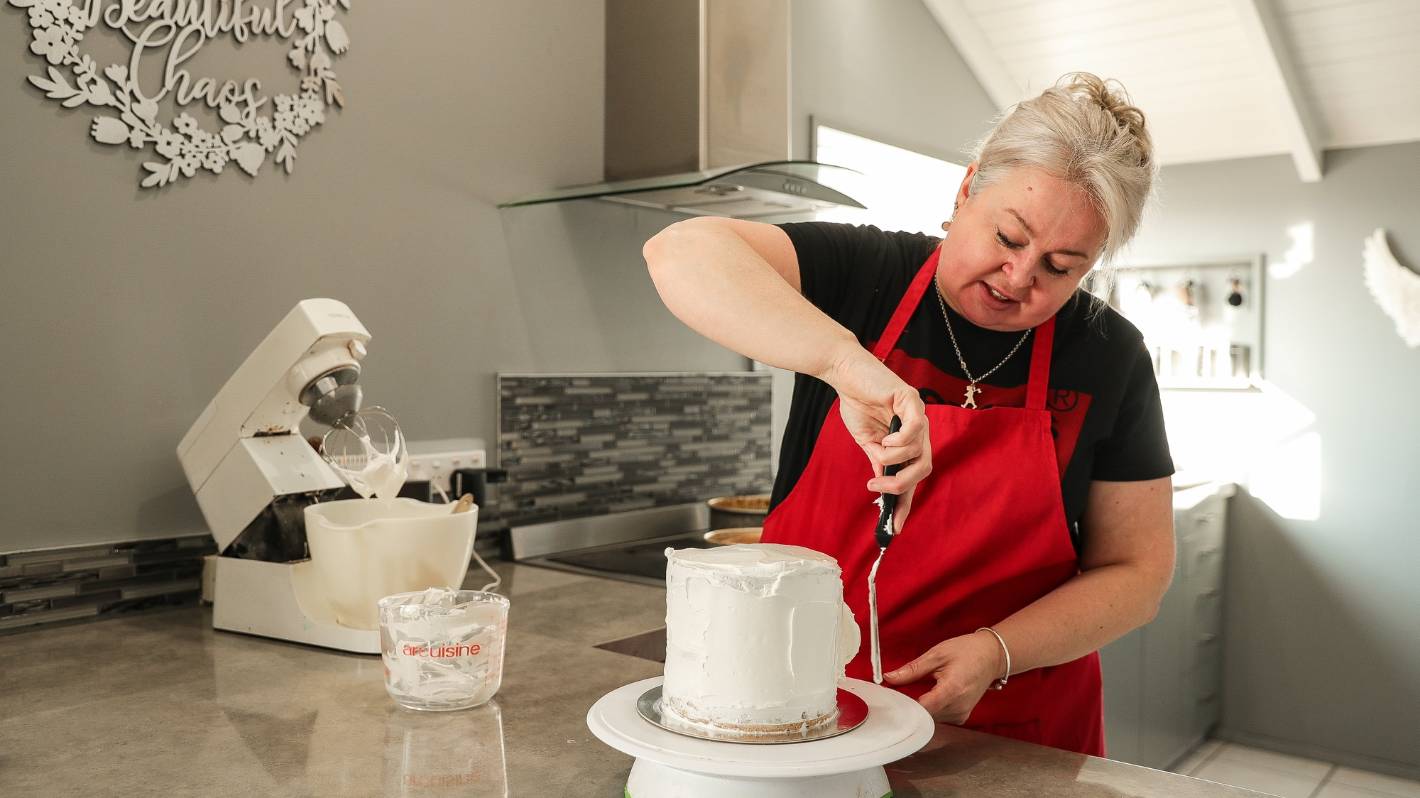 Annette Howey of Indulge Timaru bakes a cake for one of her latest clients. She closes her business after 10 years to chase a lifestyle change.

After baking cakes for all occasions for 10 years, Annette Howey is hanging up her apron, saying she will miss her customers the most and “be part of people’s journeys”.

“There are people I’ve made an engagement cake for, then their wedding cake, and then their baby shower.”

Due to making gender-reveal cakes for parties, she also knows the gender of some Timaru babies before their parents, receives their gender envelope, and bakes the cake accordingly.

“I’m the first person to see the gender of her baby.”

READ MORE:
* New principal of Mackenzie College in a ‘dream job’
* Person taken to Timaru Hospital after crashing into fallen tree in Mackenzie
* Shining a light on the heroes: mental health advocate Mike King is full of praise for those who make a difference

After baking Timaru around 5,000 cakes and never dropping a single one, Howey and her husband, Steve, opt for a different lifestyle, moving into an RV and having their weekends off.

“We move into our motorhome and change our way of life.

“We are delighted to have our weekends back.

“I make fourteen cakes on Saturday.

“I’m sad too, it’s been such a big part of our lives for the past ten years, it’s the end of an era.”

Due to her decade-long tenure in cake-making, she’s seen the ebbs and flows of different cake trends, noting that the most popular cake request in recent months is “a cake just because “.

“People are celebrating more that they can be together again.”

“Over the past few months, most of the cakes I’ve made are just because.”

Howey handed her penultimate cake Monday to Jess Grewal who had ordered the cake for no particular reason. His last official cake comes out on Tuesday. But Howey said she could do a little more later to use up the remaining ingredients at home.

“My registration expires at the end of August.”

Likewise, Howey’s cake-making journey has seen a few changes over the years, beginning in 2012 when Christchurch-based company Divine Cakes trialled a Timaru store.

“I applied for the position of manager.”

Howey scored the role and trained in cake decorating with Divine Cakes in Christchurch.

“They were there [in Timaru] for two years and then they pulled the pin.

But Howey was keen to carry on, buying the Timaru business from Divine Cakes, changing the name and moving on, Howey moved the business into his home about six years ago.

“Doing it at my house is great because I make my own hours.”

Howey said she also put in “a few small part-time hours” at different jobs because she missed the more constant customer interaction that comes with owning a physical store.

She said orders had remained constant during the pandemic, but the lockdown “made it more difficult” to drop off the cakes. But over the past decade, customers have almost been loyal.

“I only had one cake that was not picked up.”

But the situation was easily resolved, she posted the cake on her social media and “it flew away pretty quickly.”