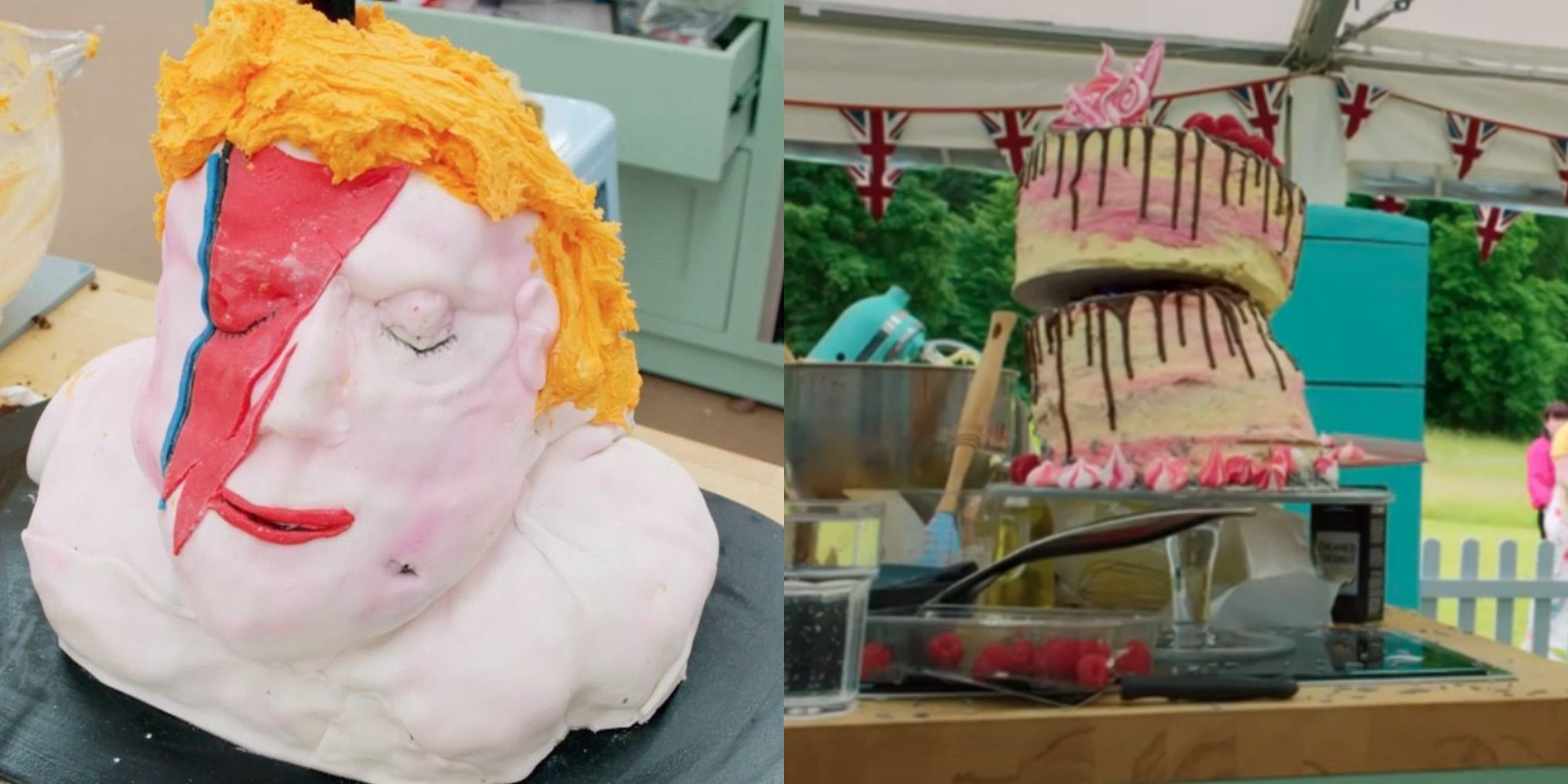 The new season of the popular baking show The Great British Bake Off was created last September with an expected success. Known as The great British pastry fair in North America due to copyright, the show premiered in 2010 on the BBC and recent seasons are easily enjoyed on Netflix.

RELATED: 10 iconic quotes from popular bakers On the Great British Bake Off

Free from the typical drama of some American cooking shows, The Great British Bake Off (Where GBBO) focuses on the challenges of baking and the delicious feeling of getting the sweet or savory dish just right. However, with any cooking contest, there will be some difficult items to prepare. For some, too difficult.

VIDEO OF THE DAY

Mary got off to a good start GBBOfeatured baker winning in the first episode. Famous and acclaimed baker Paul Hollywood, one of the show’s judges, said her signature challenge Madeira cake was “perfect”. His technical challenge was ranked third out of twelve, and his showstopper was adored by the judges. Unfortunately for her, episode two didn’t go well at all.

His signature and technical challenges disappointed the judges. His technical challenge, however, was his biggest and easiest mistake. Her arlettes were never cooked because she had forgotten to turn on the oven. By the time she realized it, it was too late to complete the challenge that had led her to eliminate that episode.

John took on the star baker in episode two and ultimately won the season, having some of the the most memorable showstoppers of GBBO. This is remarkable considering he was nearly eliminated in the first episode due to a simple mistake.

Tasked with making rum babas, John made a critical mistake. He added salt instead of sugar. He soon realized this and tried to save them somewhat by cutting off parts of the salty crust. The damage was already done. After tasting them, Paul was visibly shaken and exclaimed, “Damn…there’s too much salt in there.”

Terry had a rocky start in the first episode, with his signature and technical challenge showing up horribly. It barely made its way into episode two because of an outstanding Van Gogh-inspired self-portrait dessert during the showstopper challenge.

In episode two, the contestants had to bake a pastry cake in the sweltering summer heat with only GBBOiconic white tent to protect their cakes from the sun. Terry boldly tried to make an Eiffel Tower neck cake, but the top scaffolding tilted and then collapsed when he tried to retrieve it.

Ruby had the whole race GBBO. She was only the second person to receive a handshake from Paul Hollywood during the show’s flagship portion, won the star baker twice, and reached the Season 9 finale. It’s especially impressive because than season 9 is the most competitive GBBO season. However, despite all her excellent pastries, she also made some definite mistakes.

Tasked with making a vegan party cake, only two of the remaining six bakers succeeded in both style and taste. Ruby wasn’t one of them. Not only did her cake look sloppy initially, but she placed the lighter lemon tier below the heavier chocolate tier. As the contestants walked away, several of her peers watched in horror from outside the tent as the cake spilled.

Manon, like Ruby, made her biggest blunder with the vegan birthday cake. First impressions of her cake were excellent. “It’s absolutely stunning,” Prue said, “very elegantly done.” However, there couldn’t have been more disparity between the look and taste of the cake. Although she wasn’t eliminated until the next episode, it was the first time she didn’t feel like she was on top.

RELATED: The Great British Bake Off: 10 most controversial eliminations

When the judges tasted the cake, it was obvious from their faces that something was wrong. Knowing that Manon could have done better, they did not hesitate to comment. “It’s not good. It looks great, it tastes awful,” Paul said, and went on to describe it as “rubbery,” “over-mixed,” and “undercooked.” Although briefer with her comments, Prue agreed, saying “It’s really heavy, gooey.”

Sometimes in GBBO there are only a few good pastries in a challenge. However, in this case, there was none. Tasked with making stroopwaffels with syrupy caramel to hold the two thin waffles together, none of the nine submissions succeeded. Some of them had the correct flavors, some had the correct waffles, but all had grainy caramel.

“I can’t wait to make a good one,” Prue remarked after judging several that were all gritty. She was going to be disappointed.

International health adviser David Atherton has risen to many of the challenges. Although he never won the star baker title, he would go on to be the winner in season 10. Episode three’s showstopper was a decorative bread stand, and many of the contestants had very strong submissions. David’s, however, was not one of them.

RELATED: The Top 10 Great British Bake Off Winners – Where Are They Now?

His idea of ​​three loaves of bread decorated as African masks was strong but he accidentally damaged the crust of the third mask, ruining the overall look of the three masks together. To make matters worse, the inside of the buns were not cooked well. Prue did a taste test of the unfinished bread and pointed out that there wasn’t enough salt in it. Paul said, “The idea was pretty good. Disappointed.” A great baker, a great idea, a great gaffe.

George Aristidou made it to episode seven of season 12 despite the judges’ poor opinions throughout the series. In episode 6, he actually received mostly positive feedback on his chouxnuts for the signature challenge but then botched his baklava for the technical challenge. However, and as is almost always the case, the worst was yet to come with the episode’s signature challenge.

Having to make a terrine pie, the competitors had mixed results. Not only was George’s warped due to the concave sides, but it was also too flimsy to even remove from the pan. The worst aspect came with the taste test, however. Paul had to ask if the sausage was raw. George insisted he checked the temperature three times and the judges agreed to meet him in the middle and say it was “mushy”.

Dorret is responsible for one of the best known cooking diasters on GBBO. She ran into trouble when her black forest cake didn’t set properly, resulting in a very chocolatey, runny mess. She was visibly upset but, despite the black forest blunder, she received overwhelming support from fans on Twitter.

While it was close, Dorret was not sent home after the first episode. Unfortunately, his departure came the very next episode when his 3D bread challenge for the showstopper was disliked by the judges.

The first episode of season 11 had a particularly difficult showstopper. Contestants were challenged to make a cake bust in the form of a celebrity they admired. While the portrayals of David Attenborough, Chris Hoy and especially Marie Antionette were excellent, most of the others were mediocre. Three, in particular, were appalling.

Freddie Mercury’s bust had the lower part of his face collapsed, and Bob Marley’s bust was awkwardly colored and without a mouth. David Bowie’s bust of Marc was definitely the worst, looking like a lumpy, neckless creature. Prue reacted by saying, “Uh, that’s about as far from David Bowie as you can get,” and the baker himself agreed with her and said it sounded like Jabba the Hut. Even among a series of disappointing cake busts, Marc’s creation stands out poorly.

FOLLOWING: The 10 most popular Great British Bake Off contestants, ranked by Instagram follower

Owen Goble is a banker by day and a writer by night. He is a voracious consumer of movies and television, often having strong opinions about them. His favorite TV show is Mad Men or Downton Abbey, and his favorite movies include Drunken Angel (1948), Tokyo Story (1953), The Tree of Life (2010) and other better known films. He is also a huge Final Fantasy fan and his favorite musician is David Bowie.