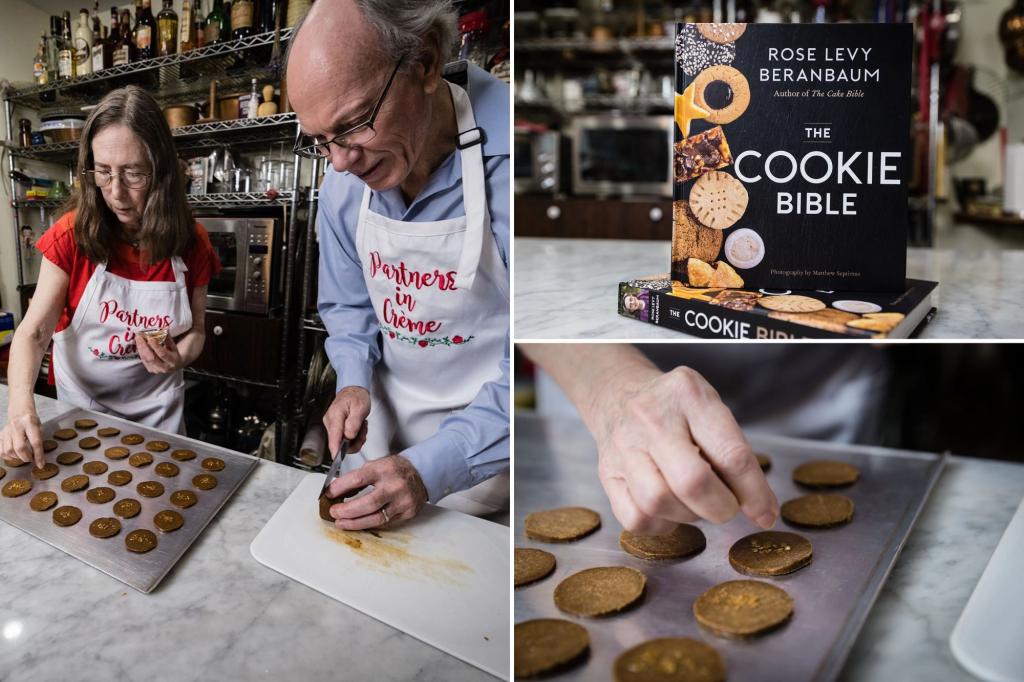 This wedding follows a recipe made in heaven.

Famous dessert cookbook author Rose Levy Beranbaum has married Woody Wolston, her co-author of ‘The Cookie Bible’ – and has her late husband to thank for the pairing.

“Shortly before he died, he told Woody and me separately that he should move in and
take care of me,” Beranbaum, 78, told The Post of his lost love, Elliott Beranbaum. “He had seen how seamlessly we worked together.”

Wolston, 68, had already been living in their Hope, NJ home for three months before Elliott’s death, sleeping on an air mattress in their basement test kitchen to help around the house in an emergency.

After Elliott’s death in 2019, Woody continued to help Beranbaum create recipes for his new cookbook, out Oct. 18 — and as the cookies heated up in the oven, so did their chemistry.

The pair collaborated on five of Beranbaum’s 13 tracks, whose fans include famous bakers like Jennifer Garner.

Wolston, a Minneapolis native, wrote to Beranbaum out of the blue in 2003 asking about the frosting recipe in his most famous work, “The Cake Bible,” which is now in its 60th printing.

The former retail manager started cooking after his first wife, who had just given birth to his daughter, asked him to do it. “She said, ‘For your birthday, go get a book of cakes.’ And I went to Barnes and Noble and chose Rose’s,” he recalls.

The duo exchanged emails for months and finally met in 2004 when Beranbaum traveled to his town to visit General Mills to film cookie videos.

“We clicked the first day we met, but totally ignored it because we were both married,” she said.

Wolston joined her at a local cafe and brought his wife (whom he eventually divorced in 2010), along with two cakes he had baked using Beranbaum’s recipes.

“He had done such an exquisite job that I said, ‘I’m working on a new book and I don’t really like other people testing for me because I can’t trust them,'” said Beranbaum.

She explained that even though she was a badass, she was interested in having him work with her.

“She made a point about it – ‘I’ve never worked with anyone, because you’ll see why,'” Wolston added with a laugh. “She is very particular.”

In 2005 he came to New York for a week-long trial. “And he had no money, but he did it anyway. He wanted to be part of my world so badly, I guess,” she said.

As they cooked in tandem, it was immediately apparent that the pair had the ingredients for success and would grow as business partners.

“I saw straight away how he always knew where to put his hands, twice the size of mine, but he was so good,” she continued. “He had such a delicate touch.”

Three years after his divorce, Wolston moved to a townhouse 20 minutes from the Beranbaums in the Delaware Water Gap.

He frequently spent time with the couple, even attending holiday dinners as a plus-one, “like Thanksgiving at Rose’s aunt’s,” Wolston said. “We would go out to dinner and it would be the three of us.”

Elliott, head of outpatient radiology at NYU Medical Center for more than 50 years, succumbed to complications from dementia with Lewy bodies and heart failure. A month before his death, he proposed cohabitation.

“Elliott was very aware that he was refusing, so he wasn’t going to wait where he couldn’t tell,” Wolston explained.

The lovebirds – who received matching aprons that say “Partners in Cream” as a wedding gift – tied the knot in June 2021, just before the new book was sent to the printer.

“We actually decided to get married because I thought, ‘This is our last chance for me to make this addition,'” to the acknowledgments, she said.

Beranbaum, a Far Rockaway native who grew up on the Upper West Side, shocked his editor with the news of the nuptials. “I wrote to him… ‘Instead of saying recognition of Woody, my partner, I would like to add, ‘and now my husband.’