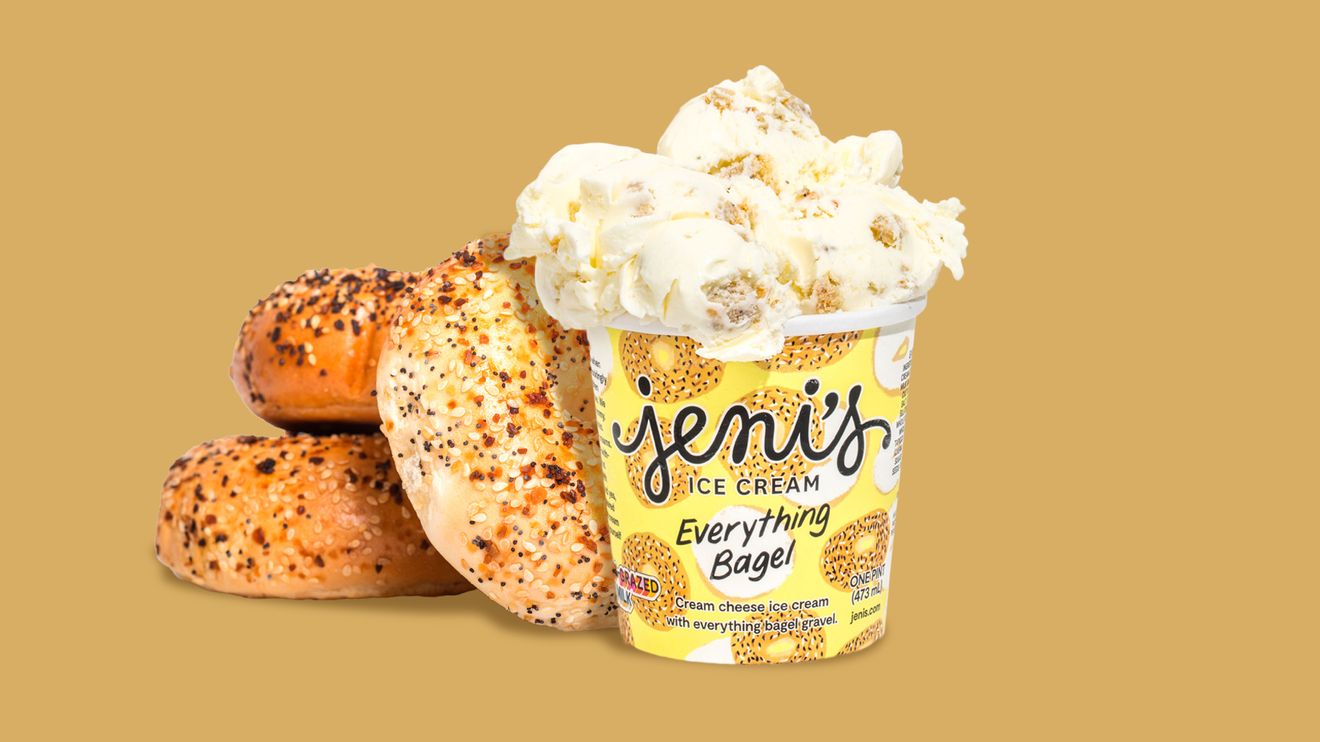 For years, the whole bagel was just that – a bagel topped with everything: poppy seeds, sesame seeds, salt, dried onion and maybe a few garlic flakes. But these days, the whole bagel has become a booming flavor concept.

Food companies from restaurants to markets are increasingly selling all-bagel seasoning mixes — Trader Joe’s says its version ranks among its customers’ top five favorites — which can be used in recipes or with a variety of items. They also sell foods with the seasoning already liberally applied.

Who needs an all-purpose bagel when you can have an all-purpose croissant? It’s available at Daily Provisions, a New York take-out gourmet shop with multiple locations. Why stick your spoon into a jar of plain cottage cheese when there’s one with all the bagel seasoning? Hood, a dairy brand, recently launched such a product.

Perhaps the most unusual object of all? An all-bagel ice cream. Yes, you read that right – the cold, creamy stuff with bagel seasonings instead of, say, chocolate chips or cookie dough. Does this flavor, courtesy of Jeni’s Splendid Ice Cream, a premium brand known for its creative offerings, represent a sign of the coming apocalypse? Or is it a taste sensation taken to its most delicious extreme?

I would say a bit of both.

Jeni’s introduced the flavor as a limited time offer this week — or should I say, reintroduced it. It first launched, also for a brief period, in January 2021. The company, founded 20 years ago in Columbus, Ohio, admits it’s a divisive product, noting in a press release that it “has been met with various overwhelming adoring reviews and strident opposition.

But Jeni’s seems to be using the split almost as a marketing tactic. Essentially, it’s about asking, “How far can we push this envelope?” »

Before we discuss how this weird ice cream flavor tastes, it’s worth noting a little all-bagel history. Truth be told, there’s no definitive story – bagel makers (and bagel historians, if there’s such a way to describe them) have varying opinions as to who came up with the idea. to take a kitchen sink approach to topping the beloved bread associated with Jewish culture and New York. But no matter who was behind it, the invention of the whole bagel seems to have happened between the early 70s and early 80s.

Jump forward at least 30 years and you finally arrive at the boom of all bagel seasoning. Trader Joe’s was certainly one of the first to dive into it, having introduced its seasoning blend in 2017. The company caused such a stir with the product that foodservice sites were quick to come up with recipe ideas: sprinkle -on the pizza! Stir it into the waffle batter!

The pandemic has likely fueled greater interest in all-bagel seasoning. Certainly, we know that with people cooking more at home, sales of spices, seasoning blends and the like have increased in general – the NPD Group, a market researcher, says consumption of these items increased by 32% compared to last year.

And while Trader Joe’s doesn’t share any sales numbers, Spiceology, which bills itself as “America’s fastest-growing spice company,” notes that it saw sales quadruple in 2020 for its seasoning. any bagel. Tony Reed, a chef who serves as the company’s senior manager, says it’s a flavor combo that speaks to the bolder way we eat today. He likes it on popcorn, avocado toast, and roasted sweet potatoes, among other things.

“Honestly, I’m not sure there’s anything I would say, ‘Don’t use that,'” he says, adding that he can’t want to try Jeni’s ice cream.

I approached Jeni’s product with quite a bit of trepidation. I mean, do I really want all those flavors in my ice cream? Sesame and poppy seeds maybe, but ONION AND GARLIC???

And yet, I have to admit, on a crazy and, yes, apocalyptic level, the thing works.

This is largely due to the ingenuity with which Jeni’s combined the two concepts of ice cream and all-bagel seasoning. The ice cream is not vanilla, but cream cheese flavored, making it both richer and more in the bagel realm. And the seasonings come together in what Jeni calls “gravel” – think something like cookie dough but with all those zesty flavors.

All of this makes the ice cream a little less stretchy – you won’t bite directly into the dried onion or a garlic flake, but you will get a taste of the flavors they impart. And blended into the dense ice cream, those flavors really seduce in that sweet and salty way.

Still, part of me opposes an all-bagel ice cream — mostly because it talks about the worst traits of American food marketing. It’s never enough to have a good idea and leave it at that. Instead, we need to take that idea and turn it into a gazillion products – for better or for worse.

“Could an all-bagel Oreo be far behind?”

I remember when potato chips started coming in a few new flavors – say, salt and vinegar – and it seemed like a cute concept. Now we have people looking for Iberian ham and spicy crayfish flavored fries and there doesn’t seem to be an end in sight to the madness. Likewise, what the hell happened with the Oreos? At this point, when I buy a pack, I have a hard time finding the original version because supermarket shelves are filled with flavors ranging from carrot cake to peanut butter Oreos. Could an all-bagel Oreo be far behind?

The thing is, maybe we should embrace the bagel on its own — a creation meant to be stuffed with cream cheese (and lox) and enjoyed on a leisurely Sunday morning. Once we go the product exploration route, we lose sight of what makes flavor so good in the first place.

I’d stress this point even more, but unfortunately, I’m too busy licking my ice cream scoop and chewing on those bits of “gravel”… Like I say, this stuff works.

The Fast Foodist is a MarketWatch column that examines restaurant menu items and packaged foods through a critical, business-focused lens. Send suggestions for products you think should be reviewed to [email protected]