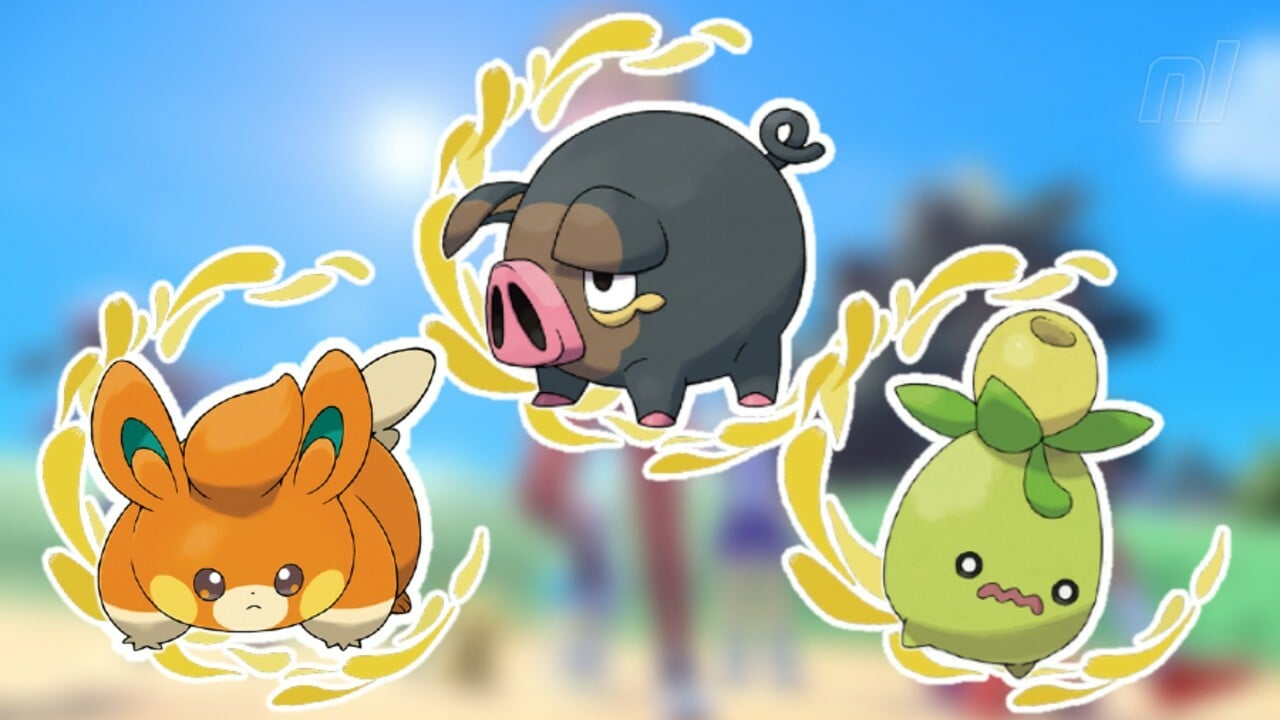 We’re pretty sure no one has asked you to compare an olive, a mouse, and a pig before. Maybe? Hopefully not. Well, that’s what we want to do today.

With the latest Pokémon Scarlet & Violet trailer, not only did we get a November release date, but we also got to see brand new ‘mons in addition to the three new starter Pokémon! Well, we’re throwing our Ash Ketchum caps off at Game Freak and The Pokémon Company, because from what we’ve seen, the Gen 9 roster is going to be an eclectic and pretty amazing bunch.

This new trailer brought us three new regular pocket monsters alongside the two legendary stars. If you’re looking for the full stats and a Pokédex-style look, check out our rolling list of all the new Pokemon we’ve seen in the game so far – here we’re just going about feel and instinct.

So let’s get to know them again!

Well, here’s what’s probably your “Pikachu clone” generation. Every time we wonder if we need another electric mouse, one comes up and makes us say “awwwww!” Look at the ! Those warm little eyes radiate happiness. And we can’t resist that little tuft of fur on her head – we just want to get in there and fluff her up a bit!

If we’re gonna be really picky, something different from electric cheek pouches might have been a good idea.

Ah, social media star. Lechonk might just have one of the best Pokemon names of all time, and we can’t resist some good pun aloud here. We could talk a bit about Lechonk here — the sad eyes, the brown markings on his face, the pink muzzle and toes, the tiny tail.

Pig Pokémon have often suffered with their evolution lines over the years, so we hope Lechonk gets the perfect evolution he so deserves, otherwise we’ll never evolve ours.

Food Pokémon can be a bit hit and miss, but Smoliv is definitely sweeter. His jagged mouth, blank eyes and wobbly posture make him look very anxious – and we’re going to do everything we can to protect him. Please don’t try to knock it over no matter what.

We want to see the little guy with a smile, though. Don’t tell us that’s their only expression, Game Freak, we’ll worry about him until we get the game! Even if they can go a week without eating or drinking, we will still be worried!

It’s a great performance after our starting trio Grass/Fire/Water, which already made an excellent first impression in February.

The Pokémon Company is a little more leery about the details of the Legendaries Scarlet and Violet, but let’s go ahead and meet them too, shall we?

Definitely two of the most interesting Legendary designs we’ve seen in a while, with some pretty striking color schemes. All we have to do is look, and first impressions are pretty dazzling.

Koraidon, on the left, has a nice prehistoric bird/lizard design. Is that also a smug smile on his face? Well, with plumes like that, we’d probably feel pretty smug too. The mix of colors is also perfect – white and black on the body and tail, and blue and pink on the feathers – as it breaks up the boldness of the red.

Miraidon is much more unnatural – in a good way! Does this energy or this electricity pass through it? Her purple “skin” looks metallic. This is floating. There’s a lot of unusual stuff going on here that’s really fun – like someone smashing Lunala with Zekrom and adding some robot parts. The pixelated eyes are just the icing on the cake, and we love the different shades of purple and pops of luminescent yellow on her body.

So, with everything we know about these new Pokémon, and a few days under our belt, we’ve all had some time to reflect, linger, obsess, and think about these new little (and big) ones. critters. Were Wooloo and Morpeko dethroned by Lechonk and Pawmi? Do Koraidon and Miraidon crush Zacian and Zamazenta? And — what we really want to know – who’s your pick of Scarlet and Violet’s best Pokémon so far?

Vote in our polls below to let us know, then discuss your picks in the comments! We know it’s hard, but we believe in you — you can choose!

Which of the new Pokémon revealed in the trailer is your favorite? (749 votes)

Just looking at the two legendaries, which is better? (573 votes)