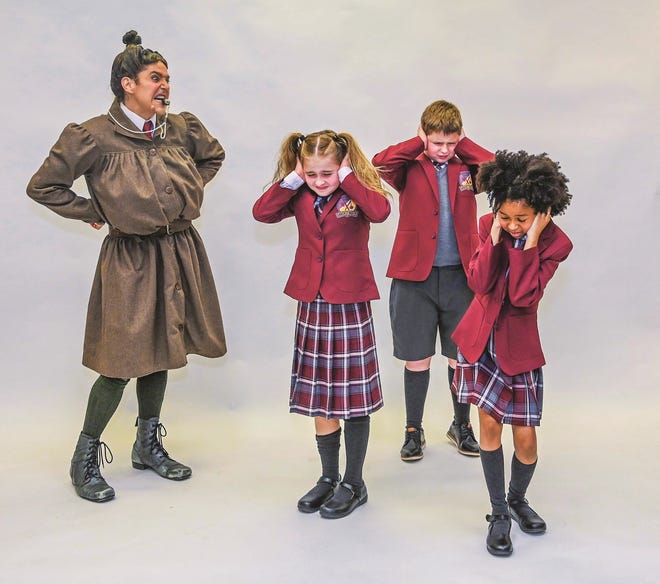 One of the most beloved heroines of 20th century children’s literature, Matilda Wormwood is known for her bookish genius, wild imagination and telekinetic abilities.

Matilda uses the power of her quick wit to tip over a glass of water without touching it and pretend to be a ghost by making words appear on a blackboard. The precocious schoolgirl also sees her nemesis, abusive headmistress Miss Trunchbull, send a girl flying by her pigtails, and watches as another classmate thwarts the traitorous Trunchbull’s vindictive plans by making an entire chocolate cake disappear.

In its long-awaited return to the Civic Center stage for the first time since the COVID-19 pandemic, the Lyric Theater of Oklahoma kicks off its summer season by performing theatrical magic for the musical version of “Matilda.”

“We’re going to do our best to pull off a sleight of hand, and the lights play such an important role when it comes to magic or misdirection. I hope I can get the audience to watch in a direction when something else has to happen here,” explained “Matilda” director Ashley Wells.

“I’m not going to give away too much…but I’d like people not to be like, ‘Oh, I know how they did that.'”

Recently named the “Official State Theater of Oklahoma,” Lyric will host the Oklahoma City professional premiere of the musical “Matilda” June 21-26 to kick off its three-show season “Summer at the Civic Center.” This is the first time Lyric has performed at their longtime summer home since 2019 due to the COVID-19 pandemic.

“It might be the first musical a lot of kids see, because they know ‘Matilda.’ They’ve either read the book or seen the movie, and they want to see the musical. So that could be an introduction to the world of musicals for a lot of people, for a lot of families, for a lot of kids. So that’s really special too,” said Wells, executive producer of Lyric.

Roald Dahl’s 1988 children’s novel “Matilda” centers on the bright and determined main character, who is neglected by her superficial parents, bullied by her dimwitted brother, and targeted by the tyrannical Trunchbull once she starts school. . But the girl also finds loyal friends, a caring teacher at Miss Honey, and a brighter future at her school, Crunchem Hall.

The fantasy story had already been made into a popular 1996 film starring Mara Wilson, Rhea Perlman and actor-director Danny DeVito when “Matilda the Musical” was adapted for the stage by writer Dennis Kelly.

With music and lyrics by Tim Minchin and direction by Matthew Warchus, the musical was a commercial and critical success.

‘Matilda the Musical’ won seven 2012 Olivier Awards, including Best New Musical, for its production in London’s West End, as well as four 2013 Tony Awards after its Broadway debut.

The musical’s US tour did not pass through OKC, so Wells said Lyric’s was the city’s first professional production.

‘Matilda the Musical’ debuts at OKC ahead of Netflix premiere

A few days ago, Netflix released the first trailer for its film version of “Matilda the Musical,” starring two-time Oscar winner Emma Thompson as Trunchbull, Lashana Lynch as by Miss Honey, Stephen Graham and Andrea Riseborough as Mr. and Mrs. Wormwood. and Alisha Weir as Matilda. The musical will debut on the streaming service for the holiday season.

Lyric originally planned to stage the lively song-and-dance show in the summer of 2020, but had to postpone production due to the pandemic.

“Essentially, this is the longest we’ve ever worked on a show. It’s been three years. We started prepping it in 2019 to get ready for 2020. Now we’re finally there in 2022,” Wells said. . “Because of COVID and finances, we had to make some changes…so it’s kind of fun and interesting.

Directing a musical that has been popularized in the cinema can be a mixed blessing: films can potentially stimulate interest and broaden a show’s audience, but they can also set the bar incredibly high for companies. theater artists trying to recreate the kind of special effects in “Matilda” on stage with the limited budget of a nonprofit.

“Especially with movies that people have seen over and over again…you expect to see the movie when you go to the theater. So how are you going to make it special without having the luxury of all these different places that they might go to a movie?” said Courtney Strong, prop designer for Lyric’s “Matilda.”

“It’s hard and it’s always tricky with these shows that people are very familiar with in movie form. Hopefully, though, we can bring some of that magic here.”

As with most “theatrical magic,” the seemingly supernatural scenes of “Matilda” are actually achieved through teamwork, ingenuity, and perseverance.

With “Matilda,” the prop team is in charge of two key sequences: when Matilda is able to knock over a glass with the power of her mind, and when her classmate Bruce (Miller Dick) devours an entire chocolate cake. . The latter isn’t an otherworldly moment, but to move the story forward, it’s important to clear the cake.

Strong originally rented a rigged prop that another theater company had used to make the cake disappear, but she and her team were unable to make it work for the cast and crew of Lyric. So they had to find another solution.

“We get it,” Strong teased. “I’m going to bake real cakes every night for this show.”

“It’s hard, but so worth it” to make the magic moments work

Lighting designer Helena Kuukka coordinates with Megan Reilly and Caleb Barnett, who are in charge of projections, to ensure other supernatural aspects of the show are properly highlighted.

“Whenever there are elements of projection in a show, the lighting trick becomes ‘How can you still… see what you want to see, but you’re not putting so much light in the mix that the projection does not read?’ Sometimes lighting and projections can be deadly enemies,” Kuukka said.

“A big part of lighting – which is true in any onstage situation, but it’s especially true when you’re dealing with special effects or any kind of magic-type moments – is that you want point the eye where you want it to look and misdirect where you don’t want it to look so you don’t reveal the mechanics behind something that’s supposed to look magical…. It’s difficult, but totally worth it.

‘MATILDA’ OF THE LYRIC THEATER