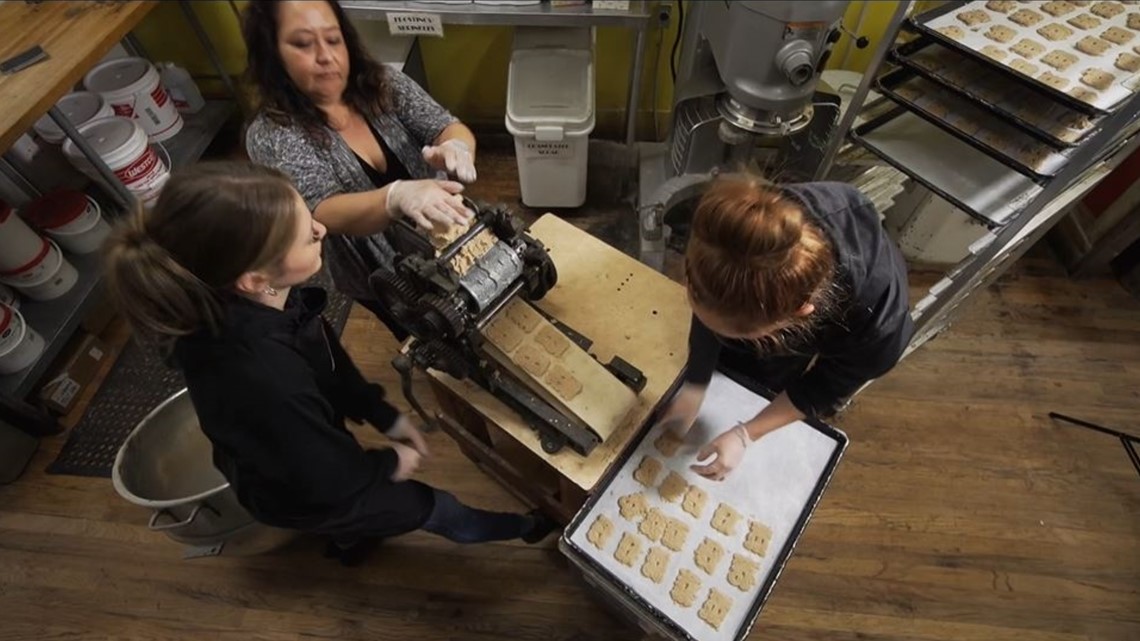 The bakery opened in 1907 and continues to serve customers original recipes prepared with old equipment. #k5evening

“There were settlers moving here…and then it became largely a Dutch community,” owner Chad Simmons said. “A lot of Dutch people immigrated here.”

He and his wife Julee are the latest in a relatively small list of owners over the past century. They didn’t have a food or restaurant background, but they wanted to invest in something that matters to the community.

“We sometimes wonder, ‘how did we end up with this gem in our hands?'” Julee said. “I like to cook and I like to eat.”

“She was a teacher, I was an accountant, now we have fun being bakery owners,” Chad added.

They remodeled the bakery to update its look, but many of the recipes and equipment they use date back to the 1900s. Their oven is a mid-century model that still produces cookies and pies daily, and a minimum of three employees must use an old hand-cranked machine from the 1930s to make their famous Speculaas cookies.

“It’s pretty simple technology, just toss it and go,” said chief executive Deb Dunnigan. “Some days it’s easier, some days it’s not, but it makes a great cookie, it’s definitely one of my favorite things.”

The most popular menu items are donuts, especially Oliebollens – round cake-like donuts.

“It’s a Dutch specialty that only rolls out on New Year’s Eve, but we’ve bent those rules and offer it every Saturday,” Chad said.

Whatever customers order, just walking through the door makes them a part of history and a sense of community that has endured for 115 years.

“It always comes down to having great people helping you out,” Chad said. “These old recipes, these archaic machines, they take people and effort and joy and just the will to show up and create these beautiful products, so we’re very grateful.”

Lynden Dutch Bakery is open daily and is located at 421 Front St. in Lynden. They also ship items from their online shop.