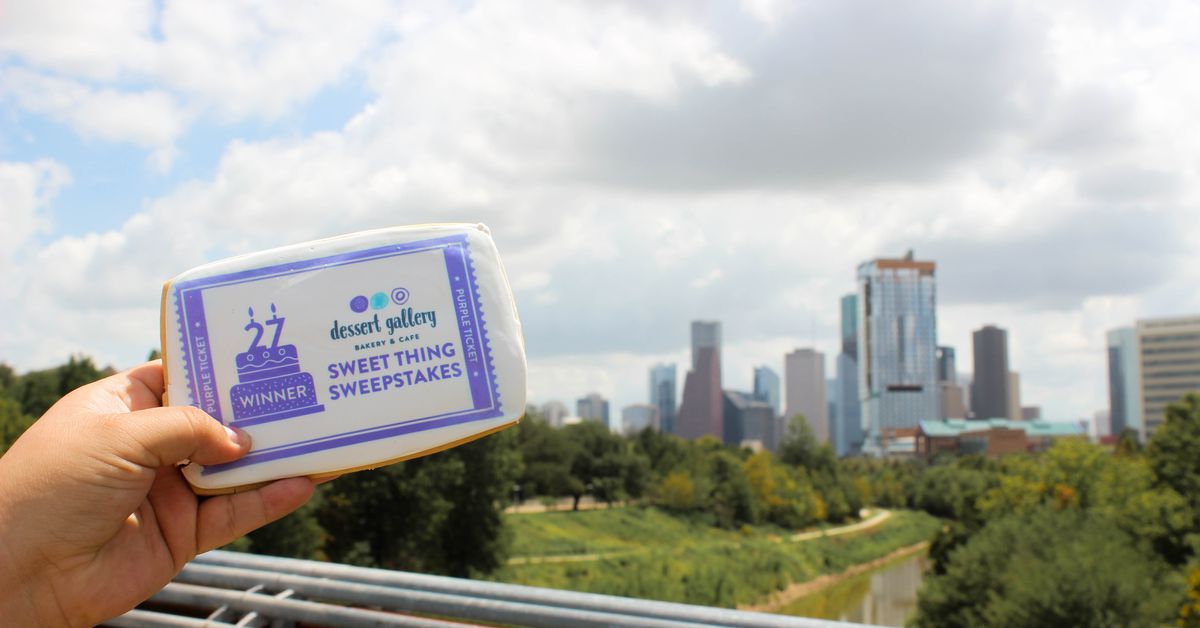 For nearly three decades, the Houston Dessert Gallery bakery has been offering whimsical themed butter cookies, top-notch tres leches and old-fashioned cakes — and ahead of its 27th birthday on Sept. 19, the dessert shop is ready. to celebrate with a Charlie and the chocolate factory-esque treasure hunt.

Friday, September 16, Kirby Drive Bakery will hide 10 cookies outfitted to look like purple tickets at “upscale” and iconic locations around Houston, says CEO and Founder Sara Brooke. Nine people who manage to find a purple ticket will win a 6-inch cake. The grand prize winner will win a free slice of cake once a month for an entire year.

Dessert Gallery will announce the winners on their Instagram stories on scavenger hunt day, followed by a post on September 20 with the winners recap.

Dessert Gallery’s Decorated Butter Cookies have offered reflections of the community with custom designs throughout the year, whether it’s celebrating Houston Rodeo season, cheering on the Astros, fundraising funds for Ukraine, to honor local legends or to celebrate cultural holidays like Ramadan or Diwali.

New bar to serve pints of Houston beer at the Ion

Owned by neighboring Baileson Brewing Company, the 2,000-square-foot dining room, which will serve pints from more than 70 Houston breweries. Second Draft will begin with a rotation of two wines and 18 beers on its taps, including pours from Saint Arnold Brewing Company, Great Heights, True Anomaly, Eureka Heights and Frost Town, and will offer seating for 66 people inside. and an outdoor patio for 20 that faces Ion Plaza.

North Italia opens its second location in Houston in the Woodlands

This fall, Arizona importer North Italia will bring its Italian cuisine to 1201 Lake Woodlands Drive in The Woodlands, marking its second Houston-area location and seventh in Texas. Known for its Italian dishes, freshly made pastas, seasonal salads and pizzas, the single-story restaurant will officially open on October 5, with an indoor-outdoor bar and a covered patio that wraps around the building.

Interactive stir-fry restaurant to the heights

The 2,200-square-foot restaurant, which debuted in Chicago in 1995, offers a “create your own bowl” experience, offering customers more than 80 ingredients to add to their stir-fry, including an array of spices , vegetables, homemade sauces, meat and seafood. Diners can choose to dive into the experience, customizing a bowl of rice, poke or ramen themselves, or they can order from the restaurant at the table or on line.

Indianola, the self-proclaimed “Modern Texas” restaurant located in East Downtown (1201 St. Emanuel Street) is testing its customers’ taste buds with its latest “Dining in the Dark” event. Held from 6-8:30 p.m. on Thursday, September 15 and 29, the event will allow diners to experience their surprise menu blindfolded in hopes of taking their senses “to a new level,” according to a statement. Tickets are $80 per person and can be purchased online.

The Houston area clearly can’t get enough caffeine. Dutch Bros is opening another location in the Houston area, this time in Montgomery County. NewQuest Properties said in a statement that the Oregon coffee chain has signed a lease for 25,000 square feet of space in Willis Town Center. The coffee company will begin work within two months, building a two-lane store where Kroger’s old gas station and convenience store used to be.


Register to receive the newsletter