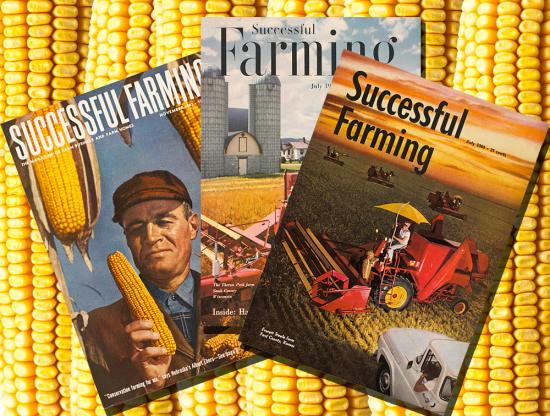 Although technology and techniques have certainly changed since the mid-1900s, farmers still plan and pray for a successful and safe harvest. This will never change.


Farmers today have thought a lot about conservation, but so have many forward-thinking farmers of the past. On this November 1947 cover, farmer Albert Ebers of Nebraska says, “Conservation agriculture for me. The average yield that year was 28.6 bushels per acre and the price per bushel was $2.16.


The Monson family is featured on this cover, and they are ready for harvest. Their home, landscaping, and amenities all appear to be in pristine condition.


A father and son, members of the Hellie family, smile at each other as they see the fruits of their labor being loaded into a cart. In the background, another family member picks up leaves.


This lovely cover features Theron Peck Farm in Sauk County, Wisconsin. Teamwork is essential for this harvesting operation, as grain is loaded before being transported to storage by the family’s trusty Farmall.


A corn farmer’s report on the shelling of the fields is the main subject of this issue, which features Dwight Miller of Dallas County, Missouri, on the cover. The first corn head for a combine harvester would be introduced the following year.


Jacob Schmitz examines his corn while his son stands ready on the combine. The Sauk County, Minnesota farmer is probably thinking about the time and labor that this brand new corn header technology will save his operation.


Arthur Knipp of Moniteau County, Missouri, is framed by his machinery as he watches grain fill his cart. Three of his children are watching from a safe distance, two perched on the fence and one peering through.


This problem followed the Kindschi brothers of Sauk County, Wisconsin, through the entire season, from crawler planting, to growing corn in a weed-free seedbed, to harvest. Clover’s blurb says their efforts “paid off in big yields, less labor and lower costs.”


Everett Steele has a great view of the sunset as he and his crew tackle the harvest on his farm in Ford County, Kansas. He stopped for a moment to speak with someone in a very sharp white van.


Here, Paul Cocking of Whitman County, Washington, is harvesting Gaines wheat. This variety, introduced in 1962, is a semi-dwarf winter wheat that has better winter hardiness, making it ideal for the Pacific Northwest.


Corn comes out of the field on this farm thanks to the four-row corn header. The lead article in this issue deals with handling materials from field to market. It also included articles on cold weather livestock care, off-farm investments, and cake recipes.