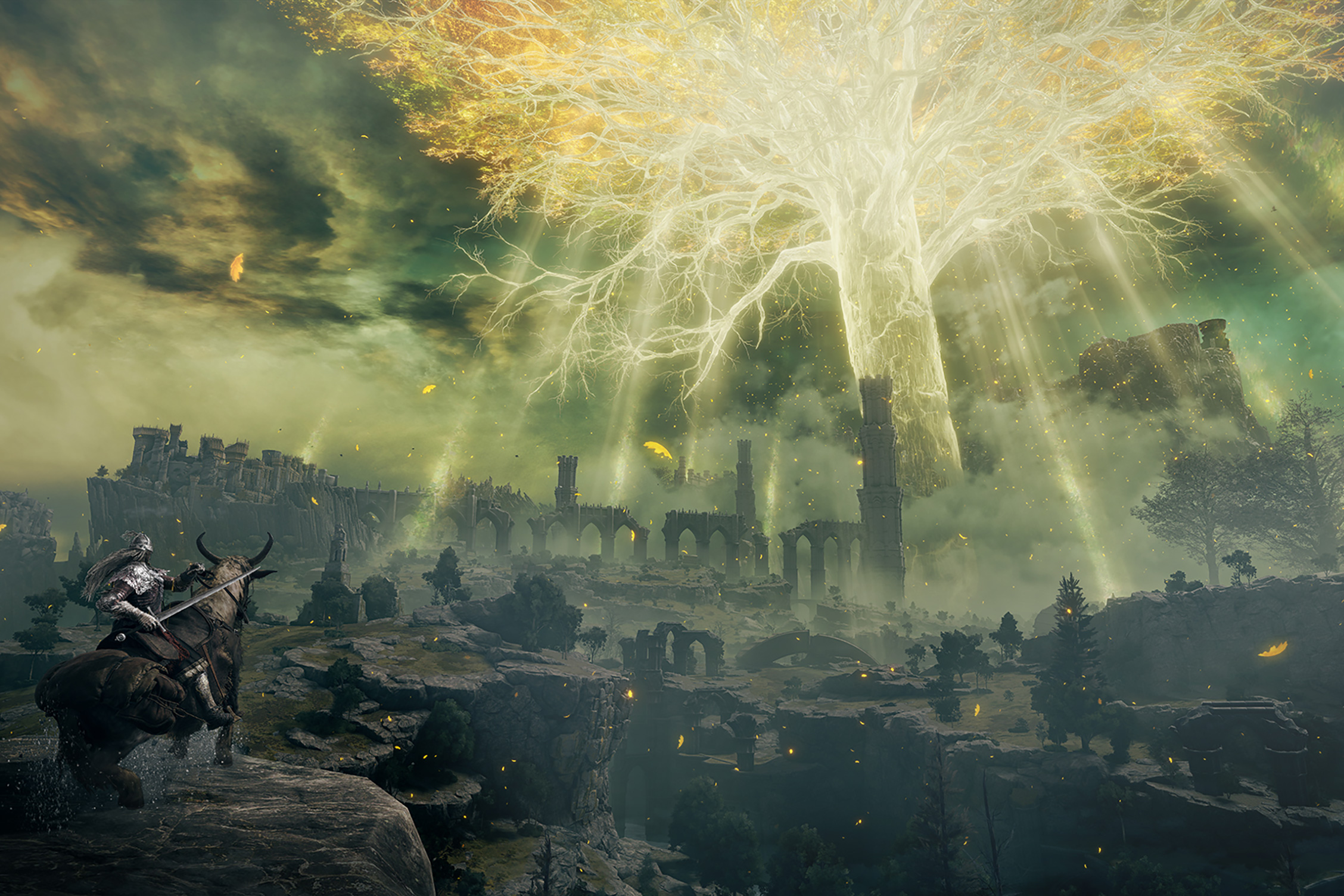 When I first saw FromSoftware’s “Elden Ring” announcement at E3 2021, I was lukewarm. I’ve always loved challenging games – ‘Hollow Knight’ and ‘Cuphead’ are two of my all-time favorite games – but I could never get into ‘Dark Souls’, another FromSoftware game. From tricky bosses to long and perilous paths, the series has never been my cup of tea. However, “Elden Ring” completely changed that for me.

Before jumping into what worked, I need to get to what didn’t. For my fellow PC nerds, I was playing on an rx 570 and an AMD 1700x, which is technically below the minimum specs required. Due to this, the frame rates of some parts dropped, especially when it was raining, but the game never became unplayable. Another problem is the repeated use of certain bosses. For the most part, I enjoyed the in-game boss battles; however, sometimes I noticed that I was fighting a tougher version of a boss I had already beaten, only now it had more health and did more damage.

My biggest complaint about this game – and from what I understand of FromSoftware games in general – is the amount of bullshit deaths you have to put up with. Invisible enemies or cheap attacks that will lock you in place and wipe out your entire health bar are frustrating enough and expected, but sometimes it’s not the enemies that kill you, it’s the camera. Because the game relies on an over-the-shoulder view as well as a target lock system that keeps enemies in front of you, sometimes I couldn’t see a thing, especially when facing large enemies. . It kept me from seeing what attacks they were about to perform, which inevitably got me killed. For example the final boss in the game had a flame breath attack that I couldn’t see half the time because I was standing behind him trying to hit him with a sword as his big ass took it all my screen. While not a big deal for the majority of enemies, I felt cheated when it happened repeatedly against the same boss.

Now on to the good stuff, of which there are so many. I rarely see games that have such vivid and imaginative enemies – they range from your standard unusually sized rodents to an eldritch horror made out of human body parts, but personally I think the boss designs take the cake. At the time of writing, I completed the main questline in around 45 hours. The first major boss, Godrick the Grafted, is an amalgamation of his enemies’ body parts, and in the second phase of the fight, he rips off his arm and attaches a dragon’s head to his stump. Even more ridiculous was the third boss I fought – Starscourge Radahn (epic name) – who is about the size of an elephant and rides a normal horse. Make no mistake; no matter how ridiculous each boss is, its difficulty remains constant.

When you’re not fighting Lovecraftian demons or birds with swords at their feet, it’s easy to get lost in the beautiful scenery. After emerging from the starting cave, you immediately realize just how vast the world is: the great erdtree shining brightly in the distance, the vast castles and ruins, the cliffs and caves all exist to be explored. Open worlds aren’t a new concept – for better or worse, they’ve dominated the gaming landscape for the past decade. “Elden Ring” isn’t particularly unique, but it hones the genre almost to perfection; there is something to find or explore in every corner of the map. In my total time playing this game, about half was spent exploring the landscape, finding catacombs, and attacking ruins. Very early in the game, you have access to a mount, which makes exploring the expansive environments more manageable. Also, unlike “Dark Souls”, you can jump, which not only allows for some element of freedom of exploration, but a new movement option in combat. Details like horse integration and the ability to jump might seem like trivial additions, but the game would be unplayable without them. For example, there are spirit springs that allow mounted players to instantly scale walls and cliffs. You don’t get as much freedom as in something like “The Legend of Zelda: Breath of the Wild” (there’s no climbing or paragliding), but restricting the movement options ensures that the movements you They’re polished, which is vital to arguably the most important part of the game: combat.

In terms of combat, there are basically two schools of thought: you could be a melee character Chad who closes in on bosses and mobs with oversized swords and hammers, or you could be a cowardly, inflicting mage or archer. damage to enemies. from a certain distance. For once, both options are quite viable; The insanely slow spell casting times of past games have been cast aside for a faster system, allowing mage builds to stand a chance against fast enemies and bosses. However, because I went with a melee-focused build, I want to focus more on that aspect. Like most other FromSoftware games, combat is heavily focused on learning boss patterns, dodging their strikes and spells, then punishing them at the end of the cycle – easy in theory, but a female dog in practice.

The fight is not very complex. You also have a wide selection of weapons, from staves and bows to giant axes and daggers, each with their own pros and cons. To avoid enemy attacks, you can retreat quickly, roll slowly, or try to parry, which requires stamina. You have a limited amount of stamina, which is needed to attack, so many fights not only monitor boss attacks, but also manage your own resources. I found the most frustrating part of the fight was the delayed boss attacks to hit the panic options. During high level boss fights, when players are hit, they tend to try to roll as fast as possible. However, many bosses have delays between their attacks specifically meant to grab this option. Conquering the combat system in this game required patience and perseverance, and most importantly, the ability to stay calm. I don’t tend to overreact to death, whether it’s hitting my monitors or slamming my keyboard, but this game had me screaming a few times – I’m looking at you Maliketh. FromSoftware has perfected this formula, making each boss a treat (in their own way).

As someone who values ​​story as much as gameplay (sometimes even more), “Elden Ring” is… right? The plot is rather classic: you are the chosen one and must save the world by beating a lot of people. The story matches the goal of the game but lacks nuance. However, I would like to clarify the difference between story and lore: story is like a slice of cake. You can eat and digest this piece. But tradition is all the cake. It’s the quality of the ingredients and the flavors and the design, it’s what’s behind that delicious slice of cake – and the lore of this game is absolutely phenomenal. Written by my favorite author, George RR Martin (“A Song of Ice and Fire”), the amount of detail in the game is absurd. Most fantasy games are written and created by the same studio, or are based on a book or movie. For example, “Shadow of Mordor” was based on the “Lord of the Rings” series. FromSoftware collaborated with an accredited fantasy author and produced something so vast and detailed that players are still discovering new things daily, even weeks after release. The lore isn’t pushed in your face – it’s something to discover for yourself by exploring new areas, dungeons, and even speaking with non-player characters (NPCs). Extensive lore flavors plenty of side quests, including working for a witch, becoming an assassin, and guiding someone to their birthplace (there’s also a character you can hug from). These side quests are so large and complex that I had to search for a guide for some of them, but they are totally worth it. There are no real relationships to build with the characters, but the side quests provide insight into who makes up the Lands Between. You can sympathize with them, despise them, or land somewhere in between. Discovering these backstories is one of my favorite parts of the game.

While I focused on the big things “Elden Ring” has to offer, what really makes it great are the little things, especially the limited multiplayer experience. I can’t speak to the experiences of invasions or player versus player duels, but I like FromSoftware’s continued integration of player ratings. Comments left by other players pop up throughout the game, some with helpful hints about the location of hidden enemies and illusory walls, and others that are complete trolls. People leave messages in front of random walls with clues like “Secret Path Ahead” that make you feel silly swinging your sword into a wall. Other people leave messages like “loud, night” and “try finger, but hole”. I don’t think I need to explain them. These messages are not essential to the game, but gave me an element of relief. I felt a sense of camaraderie with others who were playing the same game as me.

“Elden Ring” isn’t for everyone: it’s challenging, expansive, and not to mention long. I’ve seen many posts and reviews suggesting creating an easy mode for the game, which would make it more accessible to newcomers, as well as adding a comprehensive guide for side quests. In any other situation, I would agree, but I think the point of the game is to overcome its challenges. If you haven’t played “Elden Ring” yet, I encourage you to give it a try. Maybe it’s not for you, or maybe you’re like me, and this game might make you want to play Dark Souls (something I never thought I’d say). This is one of the first games in a long time to live up to my expectations, and I look forward to playing old FromSoftware titles as well as their new ones.

And, George RR Martin, if you’re reading this, please post “The Winds of Winter.”