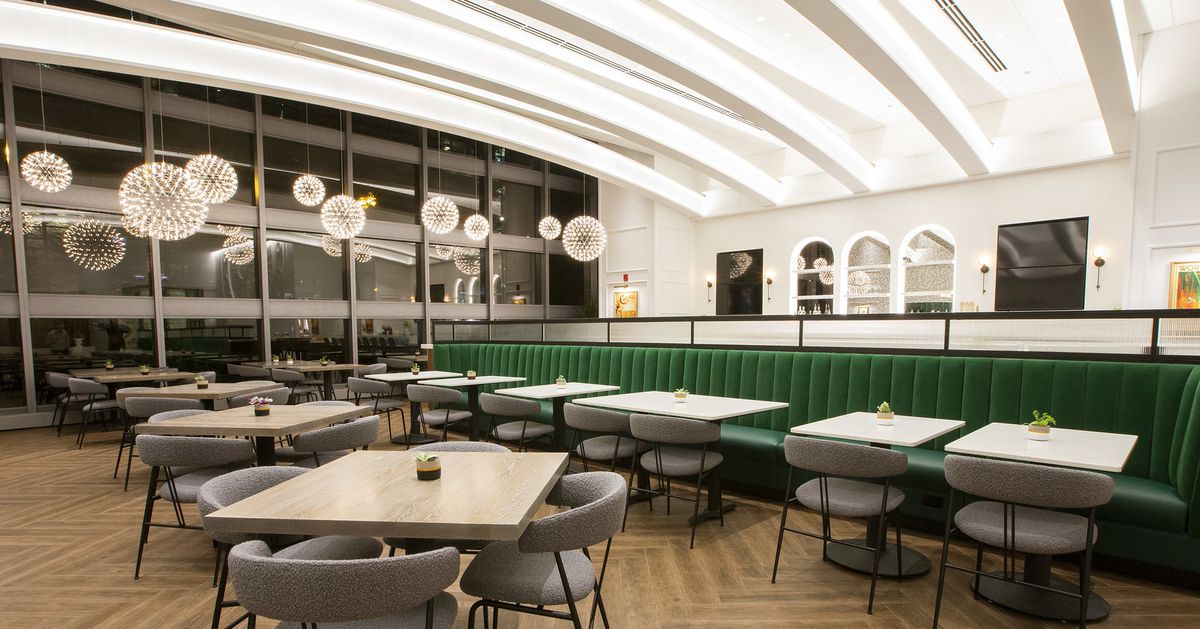 A sprawling new all-day restaurant and bar from the Chicago group behind Fairgrounds Craft Coffee & Tea mini-chain is coming in September to a prominent loop location across from the Lyric Opera House in Chicago. Kinsley by Fairgrounds, a distinctive project by the brand in both scale and scope, will marry contemporary food, drink and design with architecture drawn from the city’s historic 1893 World’s Fair. It is scheduled to open on Monday, September 19 in an office tower at 1 N. Upper Wacker Drive.

Named for Herbert M. Kinsley, a Chicago restaurateur at the time who oversaw meals at the fair, the restaurant seeks to look to the future despite its roots in the past: the space of 5 100 square feet is designed to attract the flow of workers returning to the building and neighborhood offices, as well as nearby residents.

Fitted with 15-foot ceilings with vaulted lattices, the space seats 135 people in spacious green velvet Pullman-style booths, banquettes lined with quartz tables, and comfortable stools alongside an enormous white bar. Designed by local company Barker Nestor, also responsible for the remarkable design of spotlights such as Bazaar de José Andrés and Utopian Tailgate, it seeks to tap into the excitement of the times with pendant lights that look like street lights. mid-burst fireworks and colorful artwork from the fair’s Colombian. Exposure. It also promises a resolutely contemporary aspect: a three-season outdoor terrace with 50 seats on the Franklin Street esplanade.

While the burgeoning white space stands out among the Fairgrounds team’s laid-back, family-friendly cafes, the menu distinguishes between already popular dishes and new options. Cafe regulars can expect hits like breakfast tacos and funnel cake fries dusted with powdered sugar, plus seasonal selections including an Angus smash burger with American cheese and bacon, and French toast s’mores drizzled with chocolate ganache and marshmallow sauce.

Explore Kinsley and some of its menu items in the photos below.

Seasonal options will rotate over time.