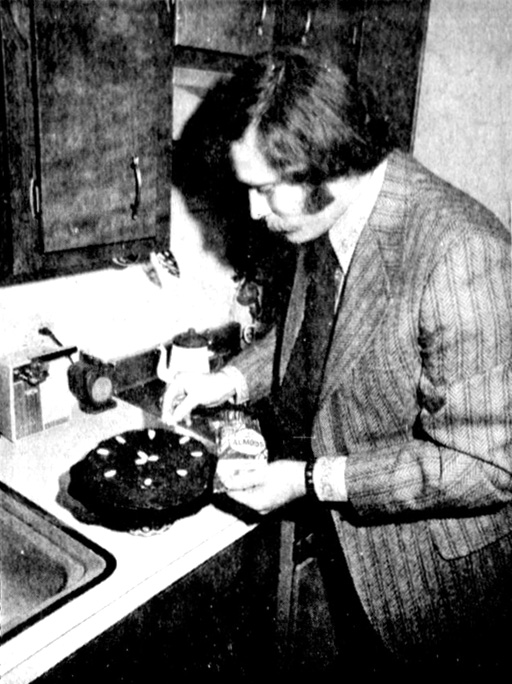 Tom Harte has been writing a food column for Southeast Missourian for nearly 25 years, his first offering in April 1997 being a recipe for Chocolate Plus Cheesecake. But it was not his first encounter with culinary fame in the pages of this journal.

In January 1972, food writer Mary Blue and an unidentified Missouri photographer visited Tom at his home on North Fountain Street, where he demonstrated his skills by baking a Queen of Sheba – Chocolate Almond – Cake. Mary’s article and a single photo of Tom were published on January 19, 1972.

Tom has featured his Queen of Sheba cake several times in his column, but here it is in its original form.

Almonds not only garnish, but enhance the flavor of a rich, one-layer French chocolate almond cake known as Reine de Sheba. Gourmet chef, Thomas Harte, 510 N. Fountain St., who specializes in desserts, decorates the perfectly baked cake. Sometimes he varies the flavor of this cake by substituting caramel candy bars with the chocolate required in the recipe. (Southeastern Missouri Archive)

An elegant French chocolate dessert! What could be more attractive for a cook whose specialty is after-meal sweets?

When Tom Harte, 510 N. Fountain St., watched Julia Child demonstrate Queen of Sheba cake making on TV, he was fascinated and decided he too could make this delicious concoction.

This was not Mr. Harte’s introduction to cooking or making desserts, as that has been his specialty for some time. “Eating is actually my hobby,” he said, “and I like to cook because I like to eat.”

The dessert sections of newspapers, magazines or cookbooks are his favorites and he reads them all. His main interest in sweet cooking started a few years ago when he made Christmas cookies. This project grew and he did for his family and friends until this year when he produced 13 different varieties.

Dessert is the highlight of a meal, believes Mr. Harte, a member of State College’s speech department and assistant debates coach. He believes it’s a chance to cook up something a little daring and even go a little dramatic. Cooking is a very relaxing hobby, he found, but if he does it three times a day for regular meals, it might not have the same appeal, he noted. .

Occasionally he prepares a full meal for his family or guests, but usually it’s a dessert, such as Jubilee Cherries, Baked Alaska, or an Exotic Cake, which he specializes in. He considers his wife, former Miss Jane Feldmeier, daughter of Mr. and Mrs. Robert L. Feldmeier, 1744 Cecelia, to be an excellent creative cook. Often they cook together.

This rich chocolate colored cake, moist with a melting flavor, is taken from Julia Child’s cookbook. Typical French cake, it is made in a single layer. Chocolate chips are melted in coffee or rum over boiling water. Its flavor is a mixture of chocolate, coffee, butter and almonds. Note that there is no leavening agent, other than a little cream of tartar, in the making of this solid fudge-like single-layer cake. The chocolate butter flavor is repeated in the frosting.

Mr. Harte shares several tips for making this dessert a success. First, the egg whites should be beaten until they form peaks, but should not be dry. When the dough is poured into the greased and floured pan, he tilts the dough so that it comes up to the edge of the pan. This method prevents the dough from bumping into the center of the pan, a common complaint of many who bake.

The toothpick method is used to test the doneness of the cake. When it comes out perfectly clean when dipped into the outer rim, it’s done even if the center is still wet.

A variation he found also works is to replace the chocolate chips with candy caramel bars. He experimented by running the candy bars through the blender and making the cake the same way. The icing, too, is made with the same caramel type bars.

Whether this cake is made with chocolate or caramel, it freezes well, he pointed out. He first puts it in the freezer for quick freezing, then takes it out and wraps it to store in the freezer.

Another of his favorite cakes is banana cake, a recipe he also shares. Although this is a standard banana cake, the cream cheese frosting makes it exceptional. Her quick cream pie is made simply with a mixture of whipped topping as directed on the package, powdered sugar, and softened cream cheese. This poured into a graham cracker crust, then topped with a prepared pie filling for a colorful dessert.

He entered the speech pathology department in 1966 and was no stranger to campus as he attended college here. Originally from St. Louis, he also taught for a year at Hazelwood. His master’s was completed at the University of Illinois where he is working toward a (PhD).

Other interests besides cooking are filming their 4-year-old daughter, Jill, and he says he is a hi-fi enthusiast. Ms. Harte’s interests lie more in the arts, such as sewing, crafts and painting.

Here are his excellent dessert specialties.

Melt chocolate chips in coffee (or rum) over boiling water. butter and sugar until light and fluffy. Beat egg yolks.

Beat the egg whites with the salt, cream of tartar and 2 tablespoons sugar until they form peaks but are not dry.

Add the chocolate to the butter, sugar and egg yolk mixture. Stir in almonds, almond extract and flour. Fold in a quarter of the egg whites to soften the batter.

Then quickly but carefully fold in the remaining egg whites. Pour the batter into a greased and floured 8-inch cake pan. Bake 25 minutes at 350 degrees.

The cake is done when a toothpick inserted into the outer circumference comes out clean. The center should still be moist. Leave to cool for 10 minutes before unmolding.

Melt the chocolate in the butter. Beat butter one tablespoon at a time until smooth. Beat over cold water until smooth. Frost the cake and garnish with almonds.

Variation: Replace the chocolate with six nickel-sized caramel chocolate bars (Heath) and replace the coffee or rum with hot water.

Put the chocolate bars in the mixer and prepare the cake in the same way as above. For the glaze, melt six crushed Heath cars in two tablespoons of water and prepare as usual.

A teaspoon or two of instant coffee can be added to the frosting if desired.

Replace pecans with almonds, if desired.

Grease and flour the bottom of two 8-inch layer pans.

Continue beating on low speed for 1 1/2 minutes. Stir in nuts.

Cream the cream cheese and butter together. Add the vanilla. Gradually add powdered sugar and beat until smooth.

Top with prepared pie filling of your choice.