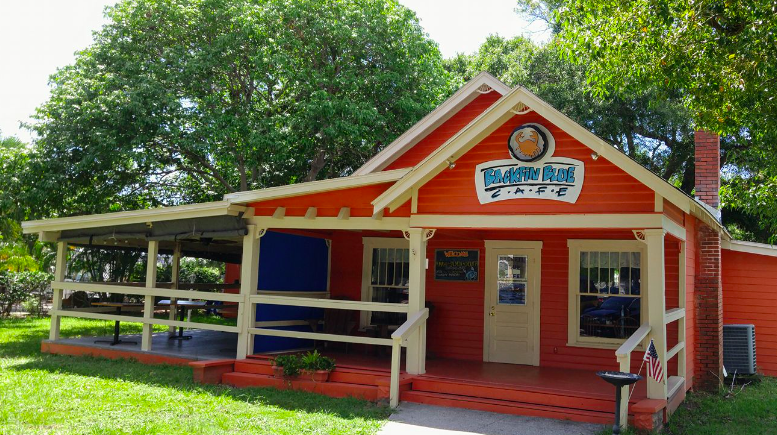 The small bungalow at 2913 Beach Blvd. S. in Gulfport no longer serves crab cakes, wine or anything else. On weekends, the Backfin Blue Café is now quiet, instead of bustling with guests and waiting-listed seafood lovers checking the time.

After a quarter century, Backfin Blue Café owner Harold Russell is selling the Beach Boulevard property to Casa Florida, a Miami hotel group that buys historic buildings and revitalizes them. They haven’t closed the deal yet, but it’s under contract and is expected to happen within a month.

“With the combination of rising supply and labor prices, the success of the past 25 years is working against us,” Russell told The Gabber, “We couldn’t deliver what people were waiting”

The blue and red cottage will be part of Casa Florida’s vision to tie the restaurant to Gulfport’s only hotel, the Historic Peninsula Inn. Casa Florida bought the inn in June for nearly $3 million. Owner Gaston Gonzalez plans to add a cocktail bar, an upscale level of flavor to the establishment, and paint it — possibly pink. The hostel will be connected to the Backfin Blue Café, but it’s unclear what will become of the restaurant. Russell will retain the “Backfin Blue Café” name and restaurant phone number.

No matter what happens to the building, nothing can change the memories of the cafe for the people who loved it. That includes Gulfportian Jeanette Perkins.

Perkins grew up around the crab-centric culture in Maryland and moved to Florida in the ’80s. Backfin Blue Café was a nostalgic surprise for her in downtown Gulfport.

“We’ve celebrated our two March birthdays there every year, though we’ve dined there at other times when we’ve been craving crab cakes,” Perkins said.

“I had no idea what it would become,” Fisher said of the restaurant’s success.

Russell may have learned how to build an award-winning restaurant, but now he says he’ll have to learn “not to work.”

Pre-restaurant, the chalet now known as Backfin Blue Café was a rental property. According to records from the Gulfport History Museum, the earliest known date of ownership of the building was in 1926. New Yorker John Ormston purchased it and used it as rental property. Its first tenant was a Gulfport artist, John Storms.

Decades passed, and a face many current Gulfporters recognize, Dawn Fisher, purchased the building in 1995. Fisher paid $69,000 for the property, which was then a duplex. Fisher stored furniture, including a grand piano that his sister played. Often Fisher’s friends would sit on the porch and in the front room with a drink in hand.

“When I came to Gulfport, it was a seedy little place waiting to blossom,” Fisher said. “I had a little extra money, so I bought the place. Then I turned it into a restaurant.

In 1995, Harold Russell asked to buy it. He had previously worked as a kitchen manager at Hurricane’s on St. Pete Beach and was willing to give it a shot.

“When I said I was going to buy the house and turn it into a restaurant, people laughed at me,” Russell said. “I didn’t have a lot of money at that time. But it worked.”

He signed the lease in 1996 and eventually bought the property from Fisher in the early 2000s.

A restaurant to remember

“When Harold opened his restaurant, he got a lot of press and people started coming to Gulfport to eat,” Fisher said. “It changed some things.”

On April 11, 1997, the St. Petersburg Times published a review of Backfin Blue.

“Even with the added porch, this little frame house can’t hold everyone who would love to be there,” the Tampa newspaper wrote.

In 25 years, not much has changed for Backfin.

The small town restaurant was known for its crab cakes, legs and seafood rivaling Maryland. Later, Russell added a gelato window, a cobblestone courtyard, and hours limited to weekends only.

The Backfin Blue Café was the first place Gulfportians Jonathan Micocci and Christine Crosby ate in town after buying a house in the city, 1997.

“We went to Gulfport for the first time looking for a new home and by chance we met a motivated seller within an hour,” Micocci said at lunchtime, we were celebrating our move. at Backfin. “Since then we have warm feelings for this place and it will be missed.”

“Backfin was one of the first restaurants I went to when I first came to Gulfport,” Banno said. “He has the essence of a community fixture in this city.”

In 2019, Banno and his wife Morgan chose it as the location for their wedding rehearsal dinner for this very reason. Morgan’s father has fallen in love with crab cakes, and the couple have corn chowder and crab stocked in their freezer for his visit.

“This place is a piece of history,” Banno said. “Harold, his family and his food will be missed.”

Maybe not missed for long. Russell told The Gabber he would love to do crab cake sales at large-scale events in Gulfport. He hasn’t ironed out the details yet, but he wants to keep in touch with the community that has supported him.

“As hard as it was at times,” Russell said. “We had this magical moment in time for a split second.”