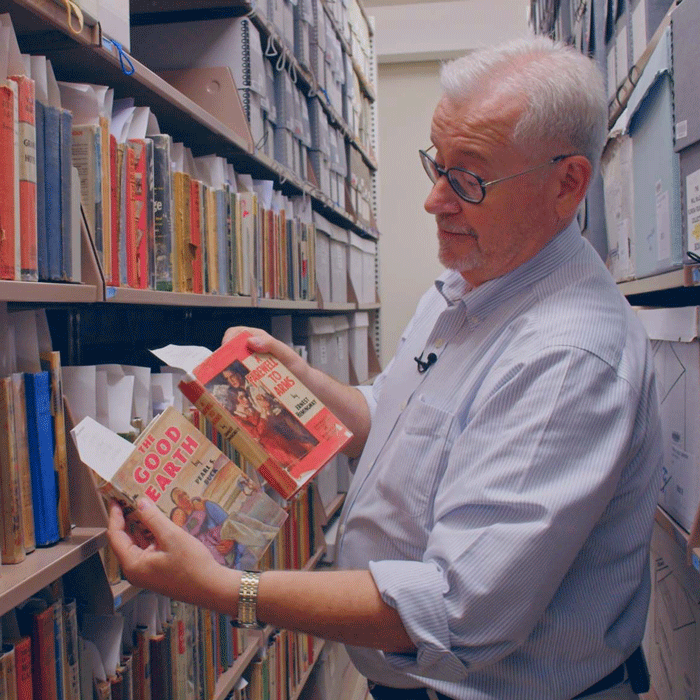 From 18th-century posters to an authentic Spider-Man costume from the 2002 movie to a slice of 50-year-old cake, the popular culture collections at the George A. Smathers Libraries have something for everyone.

Sarah Yancy Belknap, librarian and historian, began the collections in the 1950s as a dance archive. Other areas of entertainment were eventually added – theater, film, television, and music – creating what is now the Popular Culture Collections, located in the Special and Area Studies Collections Department.

Jim Liversidge, the curator of collections, said: ‘It creates a moment in time, a 100 year moment in time from 1900 to 2000. And just shows what we were doing day to day, what we were playing with in as children, as adults, we watched in movies, on television, in theaters, etc.

John David Ridge’s costume design collection contains a Spider-Man costume from the 2002 movie “Spider-Man” and hundreds of so-called “Costume Bibles” filled with his designs from Broadway productions. John David Ridge’s mother worked as a librarian at the University of Florida from the late 1960s to the early 1970s, and that’s how the library acquired this collection.

There are nearly 15,000 comics in the Suzy Covey General Comics Collection dating back to 1948. It was originally a small collection in the Baldwin Library of Historical Children’s Literature at UF – l one of the three largest collections of children’s books in the world.

The oldest items in the collections are theater promotional material – posters and programs – from Britain dating from 1713. There are 150 boxes in the poster collection, which is considered the largest such collection in the South-East.

As a curator, Liversidge’s day-to-day involves going through boxes and cataloging what’s inside. When libraries receive a donation, curators decide how they want to organize it, whether by item or by year, then they place the items in special acid-free folders and boxes and write a description of those boxes to create a research guide.

“It’s an adventure. It really is. Every day is a new discovery,” he said.

The processing time of a collection depends on the number of elements it contains. The Bob Hope collection, for example, took Liversidge more than two years to process. Liversidge’s favorite item in this collection is a piece of cake from Tricia Nixon’s 1971 wedding that was given to the comedian as a wedding favor.

“About 20 years ago there were discussions about expanding performing arts archives into what we now call popular culture collections,” he said. “There were pushbacks at the time. We didn’t think it would be something that would be used by faculty and students on campus. But we were wrong. And I’m so happy that we’ve gone the route of creating the popular culture collections. »

Liversidge said that the general collection of Suzy Covey comics is most popular among students for research and personal use. Other collections are used by history, fine arts, communications and others for different areas of research.

Liversidge welcomes donations and collectors selling their collections. “We love collectors. We love hoarders. We love people who find things they didn’t know existed in storage spaces. And we are always welcome to discuss the acquisition of this material, if it is important and would support our collections. If you call me or send me an e-mail or a letter by post, I would like to hear from you.

In fact, Liversidge has made its own contributions to the collections. In 2010, he provided approximately 180 boxes of artifacts with current affairs and politics oriented items, which is aptly named the Jim Liversidge Collection.

To access the collections, Liversidge said to phone, email or visit him in the East Library’s Great Reading Room, which is open 9 a.m. to 6 p.m., Monday through Friday. He said the collections are available and easily accessible, with some items taking 10 minutes to find and others taking a day to keep up with demand.

“It’s a colorful collection. With popular culture, it’s one of those things that you have to wait for it to gain prominence over the years,” he said. “Maybe not today, but maybe in 10, 20, 30 years they will be sought after for research. But currently most of the collection is in use, and I’m very glad that’s happening.